Archive for the ‘Home’ Category 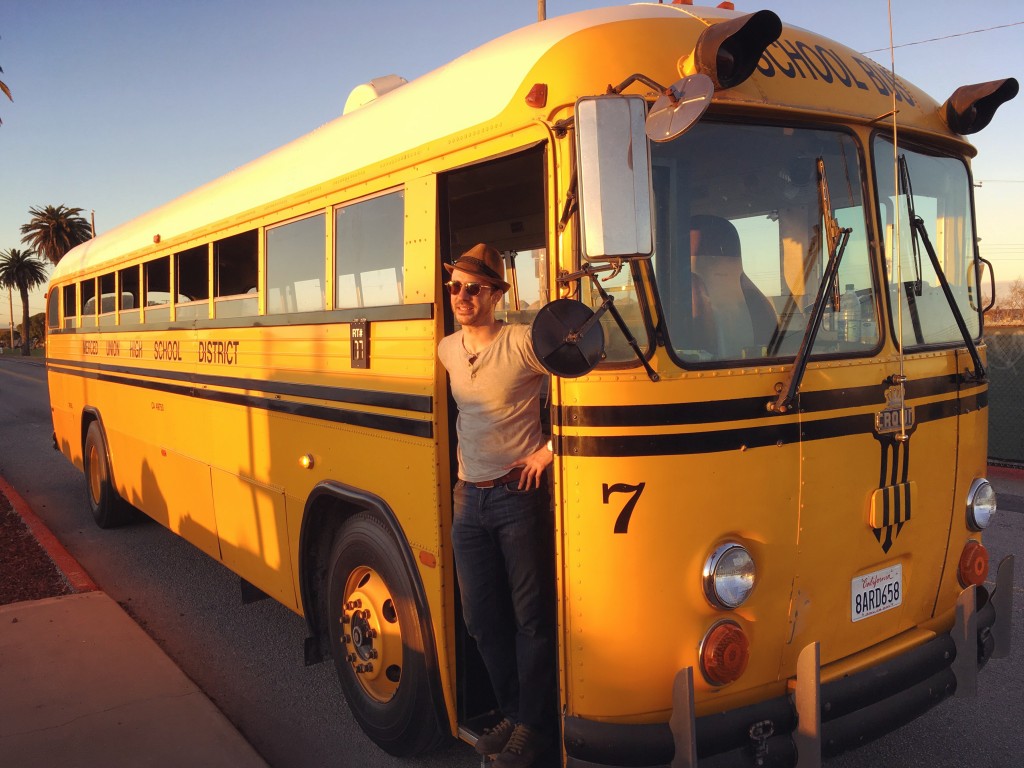 Over a decade in the making, I finally took the plunge and bought a school bus to convert it into an Orient Express style train car for the highway. It’s been aptly named the Disorient Express.

This is something I’ve been thinking about ever since moving to California in 2004 and riding in friends buses and art cars at Burning Man. In particular I’ve always had my eye on Crown Coach school buses. Besides their beautiful 1950′s styling, they were well built with standard big rig parts making it easy to maintain and the skin is aluminum so it won’t rust. I almost bought one back in 2007 but the buyer backed out at the last minute so I abandoned the idea knowing one day I’d get back to it.

That day came in November of 2017 when I was browsing eBay and Craigslist as I like to do from time to time. This beautiful 1988 Crown from Merced School District came up for sale with only 84k miles on it. I knew right then and there that this was what I had been waiting for.

A few days later the project was in full swing. I had friends coming by to help to remove all the seats and get the bus ready for its new life; a dining car and lounge suitable for entertaining as well as a sleeping quarters, bathroom, and kitchen. This project has been a huge undertaking including extensive woodworking, plumbing, and electrical. None of this would be possible without the help of many willing and able friends who are just crazy enough to follow along for the journey. 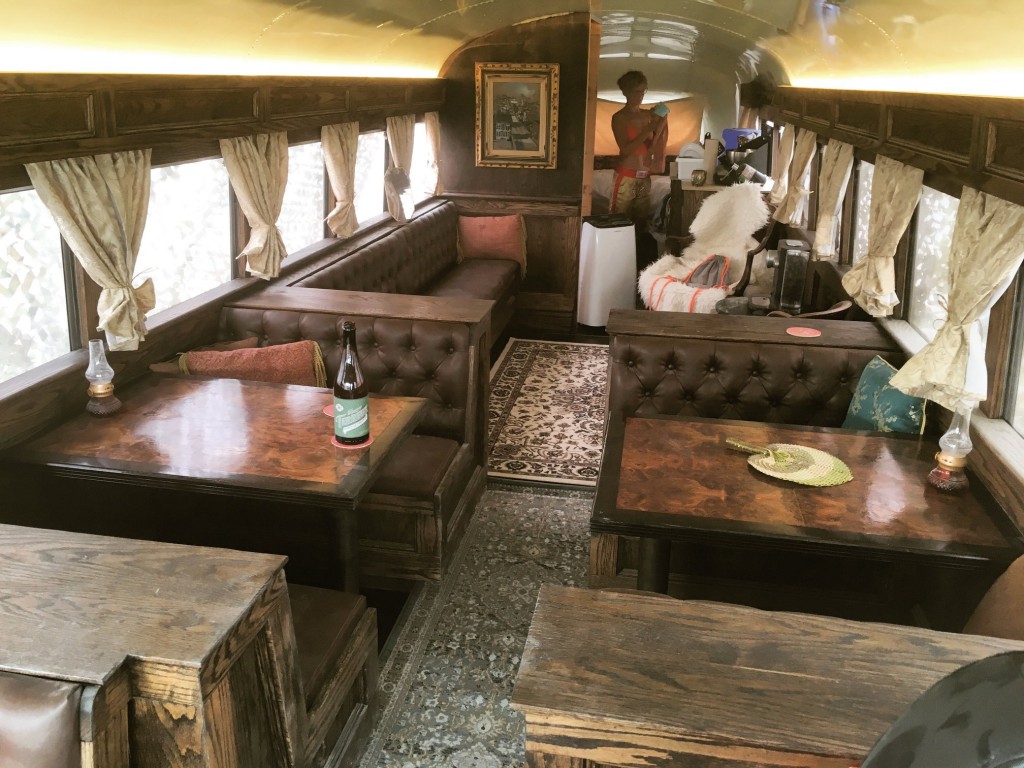 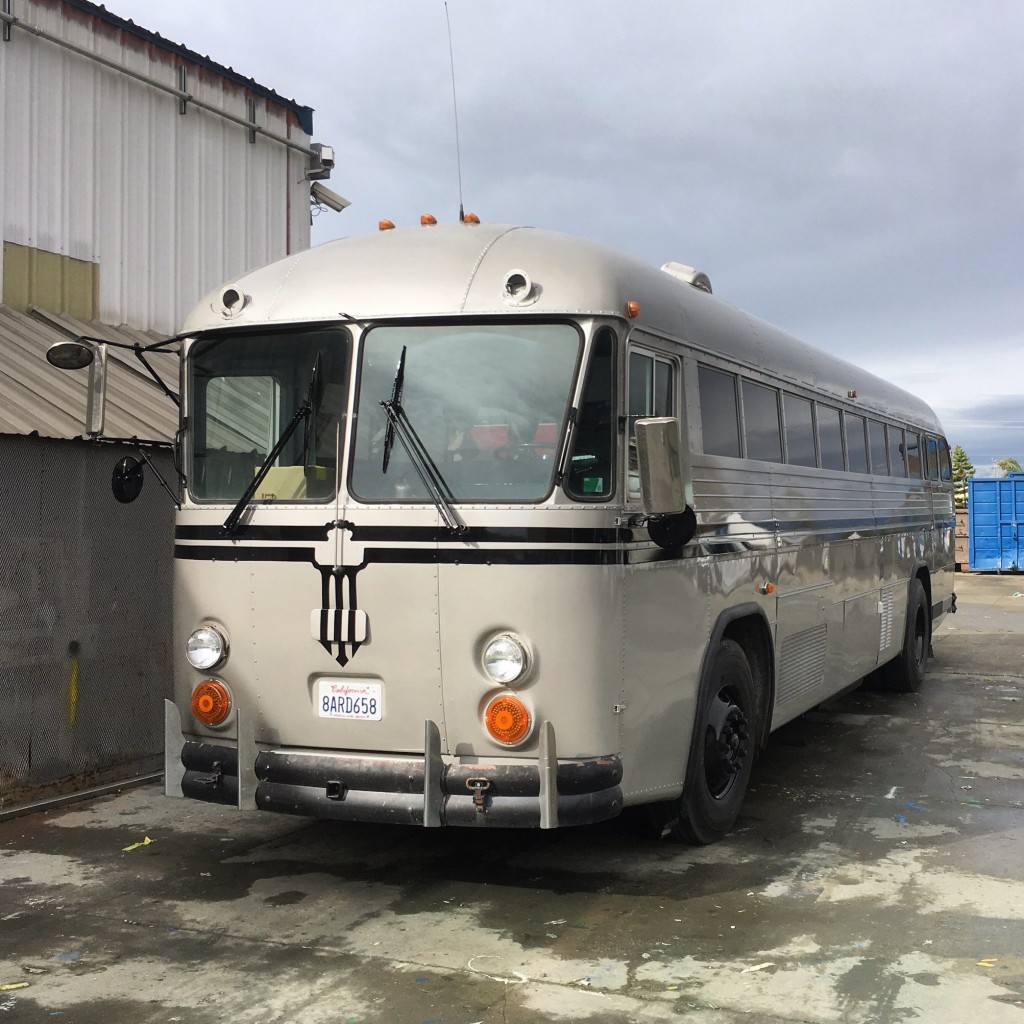 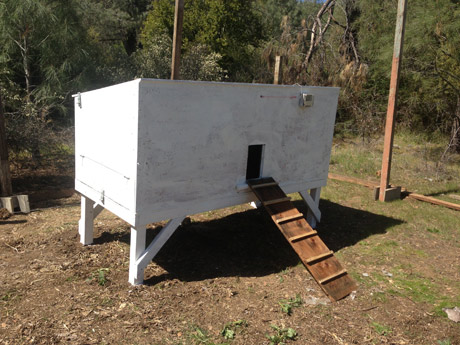 A few months back my friends Kyle and Nick joined me in an endeavor to build a chicken coop for our friends at the Avolon Hot Springs. Avalon is an amazing place high above Middletown, CA in the mountains of Lake County. It dates back to the 1850′s when it was called Howard Hot Springs and catered to the rich and famous Victorians.

Today it still retains a lot of its history with original springs still on the property, rustic cabins, and a beautiful main hall. We were happy to help out and add to the charm on Avalon. Also, fresh eggs when we visit are a plus.

Below are some of the photos and plans. We precut and built most of it in my basement and then transported it up there. Even with that pre-planning it still took us a day and a half to assemble and paint it. 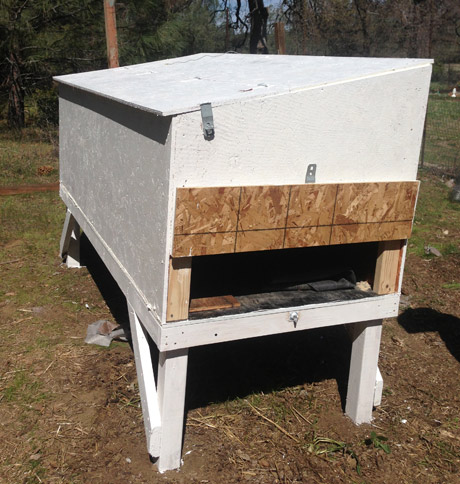 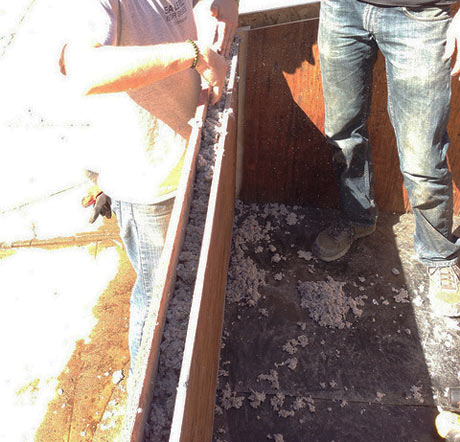 (We used organic recycled materials for the insulation) 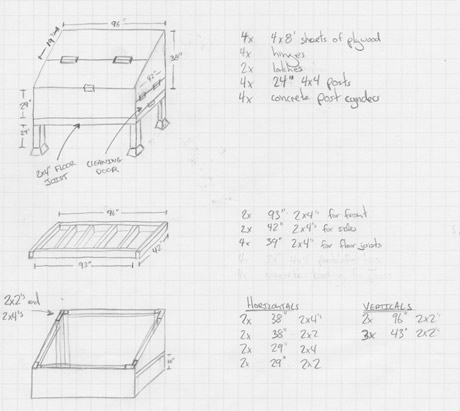 (The plans I drew up. Click the photo for a larger image)

All in all it was a very fun and rewarding project. It’s also quite simple and the average DIY’er should have no problem tackling it. It was all of our first times too! For more photos, check out the chicken coop build photo set on Flickr. 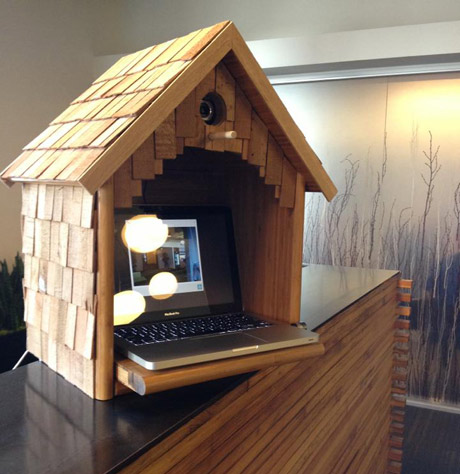 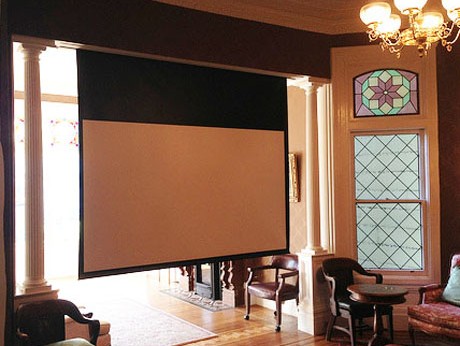 It’s been a dream of mine since I was a child to have a projector screen. Turns it out its not that hard or expensive, it just takes time and careful planning. The project has been complete for almost a year now but I hadn’t gotten around to creating a write-up until recently.

Recently Jane Dagmi, a writer for Bob Vila, found me on Twitter and began to follow the restoration process of my Victorian house. She approached me along with 3 other DIY renovation bloggers to write about our workshops and our restoration process. It was an honor and the first interview I’ve ever done like this. I hope you enjoy it.

Since then, I have also syndicated my house blog content onto Bob Vila’s crowd-sourced blog for do-it-yourselfers. Check out Bob Vila Nation for a look at what other DIY’ers like myself are building. 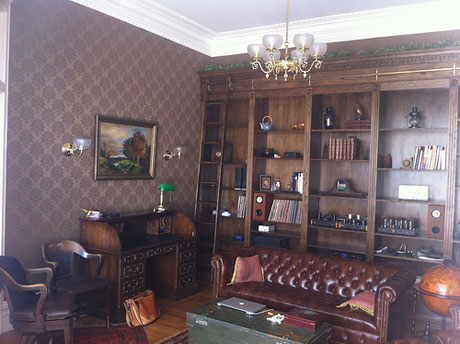 For the past nine days my father and I, with the help of my house mate and other friends, built a victorian library in my double parlor. It is built entirely of red oak and stained a dark walnut color to match the banister we built two summers ago. This has been a long time dream of mine even before we had this house and now it’s finally complete. We still have a little bit of decorating left to do but its ready to be lived in.

During the build process I blogged daily and uploaded as many photos as I could. If you’d like to see what it took check out the victorian library posts on sanfranvic.com. 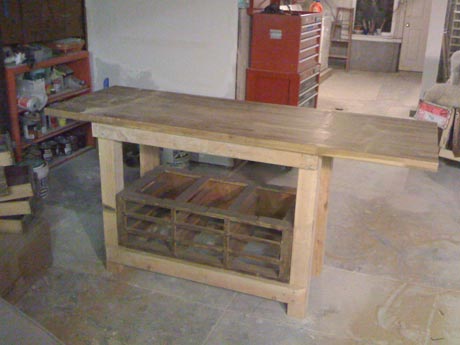 Every shop needs a good workbench and its about time I built myself one. I sourced most of the parts locally from the $75 solid maple butcher block top to the $40 shelves with drawers I got at a local salvage yard. The only things I bought new were the three Rockler vises which I have yet to install. The picture above is of everything all mocked up.

I have assembled the bottom section out of 4×4′s and 2×4′s secured with long galvanized deck screws. The base frame itself is 45″ long and 23″ deep. The butcher block will overhang 3″ on the front and back, and 12″ and 18″ respectively on the left and right. This will accommodate the vice setup I will be installing but I will post more on that when its complete. For now, you can see more pictures by clicking on the image above. 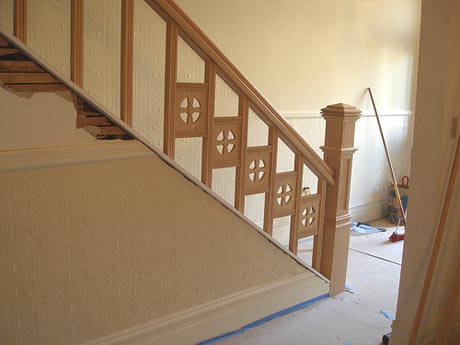 This week my father flew to San Francisco to help me, and teach me, to build a banister and repair a staircase. We tore down the wall that used to be there, replaced all the treads, and put in a matching banister and railing that we copied from the upstairs banister. For the past five days of the build I have been blogging over on SanFranVic.com where you can follow the story and see all the photos. 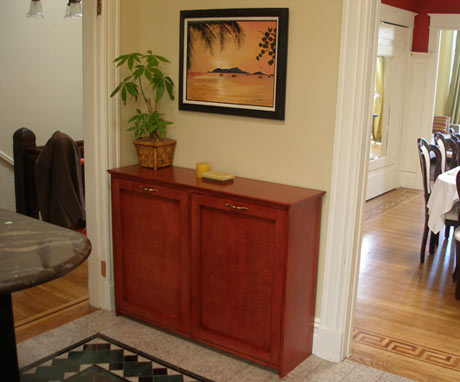 Since space is always at a premium, especially in my kitchen, its important to use every inch as best as possible. Instead of having two separate trash bins it made more sense to combine them into one piece of furniture and gain table top space. So I searched the internet to find something that would fit but unfortunately nothing came up. So it was off to the shop to solve the problem.

With the help of my roommate, we built this trash and recycling center out of maple plywood using simple dowel joinery. We finished it in a cabernet color and added some simple hardware like magnetic latches and handles from our local hardware store. All in all the project only took a few hours total and solved a big problem.

0
Lighting for my friends wedding 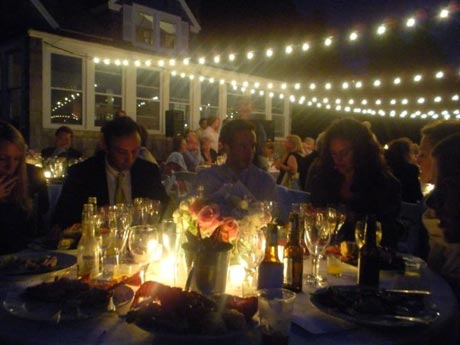 My long time friend Caroline and her fiance Regan asked my housemate Brian and I to do the lighting for their wedding because they had seen our renovation work on sanfranvic.com. We were both honored and excited to help out. Not only did it save them thousands of dollars from hiring a lighting expert it allowed us to give them something they will always remember.

The light array was pretty simple and only took a few hours to setup. We hung up five strands of 32 foot strings of ping pong ball lights from the reception house to a rope 10 feet up that we ran parallel to the house. That rope was held up by two pieces of 10′ galvanized steel conduit that was anchored to the ground with a few pieces of rope and some stakes. The hard part was just getting the lights up and taught so they were high above everyones head. I’m happy to say that even after the storm that came through they still stayed up and everything went off without a hitch.

I’d like to thank Caroline and Regan for having me and I was honored to be a part of your wedding. I was happy to help and even happier to give you a present that you’ll always remember and cant be returned. It was a great time and something I wont soon forget.