Archive for the ‘Cars’ Category

I’ve owned this car for almost 2 years this August and for the life of me I have not been able to get this car to sit flat, i.e. not sag in the rear. I have replaced every bushing, removed every spacer, replaced the springs and shocks and still, the sagging continued. So I finally bit the bullet and replaced my front suspension struts with coilovers which allow for an adjustable ride height. Not only does the car sit level it handles better, especially squatting into a corner. 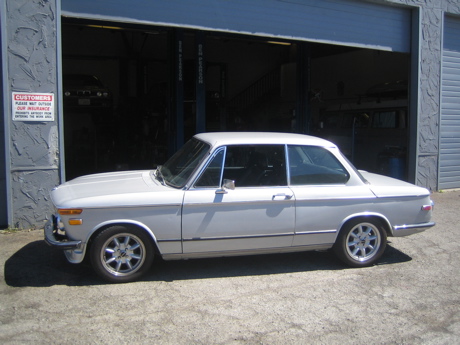 The Bay Area BMW 2002 car show is coming up this Saturday so in preparation to avoid flame wars I have cleaned up the car a little. Everything is coming together quite well, including the tuning. The Bay Area 2002 Show and Swap may be the biggest in the world with over 100 cars attending. Its incredible to see so many of these cars so well cared for. Here are some photos for those of you who cant make it to the show.

0
My car was just featured on Jalopnik!

While having a few drinks with a buddy of mine at a local bar in San Francisco I met an editor for Jalopnik, a sister site for gawker.com. After talking to him for a while I mentioned my open source fuel injected 1973 BMW 2002 sitting out on the street. Next thing I know he is taking pictures of the car and taking down my info. A few days later some friends who read the site me this link featuring my car. 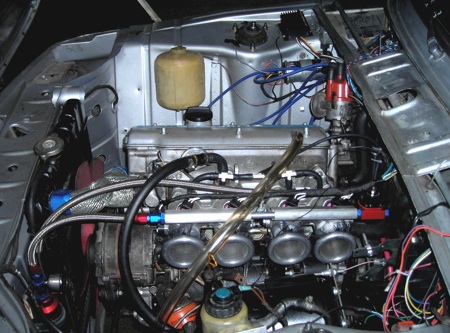 After months of planning, documenting, and gathering parts the project is finally complete (almost). I still have to ditch the distributor for a crank fired ignition system but this’ll do for now. As always, more details and exact plans can be found on the wiki 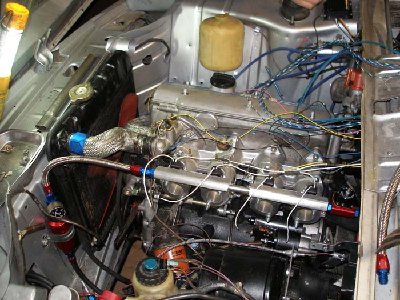 After 5 days of working on the fuel injection I am finally almost complete. Fortunately my friend let me use his garage for week which has been extremely helpful. I also had the help of my roommate. Right now are are stuck because my computer cannot get a signal from the coil telling it to fire. I have to do some more research but I am sure it will work.

After doing hours and hours of research I have decided to go a different route and use individual throttle bodies (ITB’s). This means that each port will have its own throttle plate, ideally allowing more air and hence more fuel; however this does create more issues in setting up and tuning. My MegaSquirt computer wants a pressure reading of the air between the throttle plate(s) and the valves. With my setup I have to tie all four individual runners together so the computer can get a reading.

In the spirit of being open source, I have decided to convert my little BMW to Electronic Fuel Injection (EFI). What prompted this decision was a road trip to Chico when my car didnt perform as well due to the environment, i.e. the altitude. This is due the carburetor, a great invention that works incredibly well to this day, but for me, it wasnt enough. I liked the idea of being able to tune my car with a computer. Even while I’m driving! It sure beats taking the carbs apart over and over to change the jets

. As always, I will be managing the project and researching on my wiki.

The MegaSquirt system was built by a bunch of Assembler engineers who realized that there was a place for open source in this industry. If I were to do the same via some of the closed source manufacturers I would be paying thousands with very limited resources. This is exactly how I view software in my day job. I am 100% open source in all of my environments. Now my car is the same. More info on this project can be found on the MegaSquirt website.

0
Motor is back and ready for installation

After a long month of work and restoration the motor is finally back and ready for installation. It was somewhat straightforward to install; however, since this was my first time it did take time. I had 2 friends helping me which was definitely a plus. After we negotiated the motor in we had to deal with the output shaft from the tranny which was tough. After at least an hour we got it locked in and the clutch was feeling good. Here are some shots. Much more can be found on the wiki

0
Engine bay is ready for the new motor

After hours and hours of scrubbing and sanding the engine bay is finally clean and ready for primer, base, and clear coats. Here are a few photos.

0
Time for a motor rebuild

Besides the fact that my little 4 cylinder is burning oil, its also drawing a lot of attention, as well as polluting horribly so I think its time for a motor rebuild. The odometer reads a little over 68k but it has also stopped. As to whether its 168k or 268k I’ll never know. Nevertheless, its time to yank the motor.

As I said before, I have little automotive experience, however I have been building and tinkering my whole life so I figure I can tackle this one. The first thing I did was found a competent machinist who could deck, place, hone, rebuild and balance. I found a great guy in Livermore, CA named Terry Tinney who I would highly recommend.

Now it was time for disassembly. This was quite simple actually. The hardest part was keeping track of everything. As always, I used my trusty wiki to photo document for reassembly. Also, plastic baggies are clutch. Label and keep everything!

Here are a few shots of the motor pulled out.

While Terry is rebuilding the motor, I will be scrubbing down the engine bay to get ready for a coat of paint. If you’re anything like me, you’re probably wondering whats up with the specs on the motor! They can be found on the wiki, but also right here: